Recently our cofounder, Kirk Robinson, caught up with Life Coach and Inner Good customer, Julie Singer. We wanted to hear more about her life story, including her battle with Crohn’s disease, her journey as a patient, adjusting to life with an ostomy (ileostomy), and how she is helping others with autoimmune diseases live life to the fullest.

Julie is an unbelievably caring individual who has a zest for life, a love of adventure and a heart to help others. She naturally exudes positive energy and by looking at her, or watching her cliff jump, you would never know that she has struggles with a life altering disease.

Her coaching practice, Inside Wellness, is about helping people with IBD navigate through issues such as pain, self-worth, health and wellness, and relationships to reach their personal goals.  This is a part 1 of our fascinating conversation with Julie.

Kirk: Where are you from originally Julie? 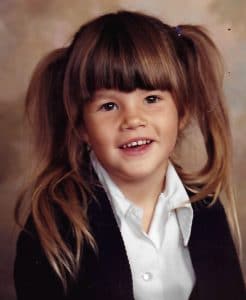 Julie: I was born in Saskatoon and moved to Victoria when I was less than a year old. I lived in Victoria for the first 5 years and then my parents split up and my brother and I moved to North Vancouver with our mom. We went back and forth between Victoria and North Vancouver to see our father every other weekend.

Kirk: Raised by a single mom?

Julie: Well actually both my parents remarried by the time I was 8 so I have a huge blended family.

Kirk: So you were diagnosed with Crohn’s at age 14. Can you remember having symptoms at an earlier age?

Julie: Yeah. I definitely had symptoms for many years before 14. I probably noticed having stomach aches from about 8 or 9 onwards. Our family doctor just kept saying it was probably lactose-intolerance, and I would cut out milk and it kinda made a bit of a difference but nothing significant, then we tried some elimination diets which where really hard to stick to.

So there was never any real clarity on what was going on and things just kept getting worse. I was in pain all the time and at quite an early age, like age 10, my perineum started splitting, so symptoms of perianal disease from Crohn’s, but my doctor still didn’t really clue in and then eventually, she referred me to Children’s hospital where I had a colonoscopy and I was diagnosed.

Kirk: And during that time did you discover anybody else in your family that had Crohn’s?

Julie: No immediate family member. I think there’s a distance second cousin who had it, but what I experienced was not a common thing within my family.

Kirk: You would think perhaps there would be 1 or more individuals in your immediate family circle that would have it. What I understand is that Crohn’s disease is passed on genetically.

Julie: That’s what they say, but I’m not sure if this is entirely true. My personal opinion and I don’t know how accurate this is but, … I definitely feel like there was emotional stuff that wasn’t properly processed after my parents divorced.

I have clear memories of my GI doctor saying “you’re the most stoic person I know!” I was always swallowing down painful emotions. It was interesting when I had my ileostomy and had my intestines physically cut-out of me, I had the craziest emotional release in the recovery room.

Then I could hear these nurses talk across the room and I think one of them said that they had given me ketamine and I shouldn’t even be conscious at this point. They were like: “there’s no way she can still be in pain after all we’ve had given her. I think she’s having an emotional release.” And at that moment I was like oh yeah, maybe that’s it! There was definitely a huge emotional processing that went on immediately after surgery.

Kirk: What an intense experience. I had like a friend talk about the process of becoming a father and the thought of what a marital split could mean for their child (they had a son). He said there’s a cosmic thing at play for a child, this connectedness between a mother and father that needs to be there or else the world ceases to make sense.

Julie: Totally. It was just a challenging time you know. Not just the split, but then moving to a whole new city and changing schools and starting french immersion. When my parents split, my mother, brother and I moved from Victoria to North Van, where I was shifted down to Kindergarten (in French Immersion) for a month, then sent back up to grade 1 for another month. The following year I moved into grade 2 french immersion in September. It was tough to deal with all the changes that had taken place. I don’t remember ever being encouraged to express the grief I was feeling. Looking back I have a lot of empathy for that small child because she definitely had a lot to process and just kinda dealt with it, by swallowing the tears down.

Looking back at my struggle with Crohn’s, I do think that the emotional strain was a significant factor. I believe that stress might have caused something to change in my gut, maybe I was more predisposed to some kind of horrible bacteria? I always felt that I was exposed to something that got into the lining of my intestines and I was just never able to clear it. For instance, I was on antibiotics pretty much every 3 months for strep throat or tonsillitis from age 4 – 8, so that also really impacted things. Combined with the emotional piece…

Kirk: For you then there is a clear link between the physical, as well as the emotional and psychological.

That concludes part 1 of our conversation with Julie. Click here to learn more about her Coaching practice, Inside Wellness. Click here to see her share her patient journey amongst an audience of healthcare professionals on Youtube. If you are interested in sharing your journey with others, send Kirk a message on our contact us page.