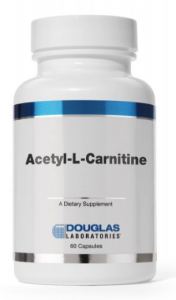 Acetyl-L-carnitine, a naturally occurring metabolite of L-carnitine, plays a key role in supporting cognitive function during aging while helping to reduce fatigue. In most tissues of the body, both L-carnitine and acetyl-L-carnitine are involved in fatty acid oxidation. L-carnitine shuttles fatty acids from the cytosol (the cell fluid) into the mitochondria (the cell’s powerhouses) for oxidation and energy production. In the brain, acetyl-L-carnitine specifically acts on fatty acid oxidation in astrocytes and neurons to produce energy. The compound exerts its cognitive protective effects through three main actions. Acetyl-L-Carnitine protects tissues against oxidative stress while producing energy and influences the activity of nerve growth factor (NGF), the neuropeptide responsible for the growth, maintenance, and survival of certain neurons. It has also been shown that acetyl-L-carnitine can help to maintain cellular membrane stability and to restore age related membranal changes.